Do you ever feel that some guys have got it much easier when it comes to gaining muscle? Sure, your inherent body stricture plays a large part, but there is one trump card that changes everything; your testosterone levels.

Testosterone is frankly what makes a man, a man.

Though it is not the only androgen in the male body, it’s the reference point for success, and an indicator of your overall health.

Don’t feel like you’re gaining as much muscle as you think you should be? Given that your diet is on point, the next most common cause is your testosterone levels.

Luckily, if you don’t have a deeper medical condition, it is quite possible to improve and optimize your testosterone levels, relative to your age.

One of the best ways to do so?

But not just any random exercise.

Cardio certainly won’t do it.

Rather, we are referring to the “big lifts”, heavy load bearing movements that force the body to become stronger and bigger.

Eating foods is a necessity for this to happen, but so too is the right exercise selection.

Have you ever wondered when your body natural “spikes” its testosterone production during the day?

In a normal, untrained individual, this period is immediately upon waking (and just before).

This is quite clearly indicated by the appearance of “morning wood”, a normal occurrence in many young and middle aged men.

There is, however, one other period during which testosterone levels exceed this circadian boost.

That time, gentlemen, is immediately following the end of your intense weight training session.

In order for this testosterone spike to be meaningful however, you need to keep your training intense. Intense boils down to three things:

These include the large muscles of the lower body, and back primarily. Though many consider the chest as a large muscle group, it really isn’t.

Though we are not discouraging chest training, as you will want to do it to achieve an aesthetically pleasing physique, in terms of sheer testosterone secretion and synthesis, stick to where the bulk of muscle is concentrated on your body.

Compound movements are the exercises that involves flexion through more than 1 joint.

Take for example the dumbbell curl, and the squat. To (correctly) perform a dumbbell curl, the only joint that should be in motion is the elbow, although many trainees may hoist the weight using momentum and shoulder swinging, this is wrong.

In comparison, the squat MANDATES two joints to efficiently pull off the movement.

The knee, and the hip (or pelvis if you prefer). As this exercise recruits more joints, so too will the musculature involved.

This is why the abdominals are also heavily utilized during squats, as it’s necessary to stabilize the spine and hips under the burden of a loaded barbell.

It also bears mentioning your working sets will be heavy weight, and does not count your “warmups”.

You are not training for a powerlifting competition.

You want to elicit the maximal need for testosterone, making your body think that rebuilding is critical at that time.

Long rests will not do that. At a maximum, rest for 1 minute between sets, though 45 seconds is ideal.

There should be no training program on the planet without the aptly named “king of all exercises” on its list.

The squat is a great example of a compound exercise, one that forcibly pushes weight upwards through the heel.

Compared to other leg centric exercises, such as the leg press, squats can elicit a much greater testosterone and growth hormone surge, since the leg press is far less inclusive of accessory muscle groups.

Though there are variations of squats, the gold standard remains the standard back squat. To perform:

1.  Place a loaded barbell (or empty if you’re just beginning) on the upper back, using your trapezius (traps) muscles as a cushion.

Do not rest it on the back of your neck for risk of serious injury or pain.

You should use a squat rack with the barbell placed at a level just below its resting point on the upper back, so that a slight bend will allow you to lift the bar.

2.  After placing the bar on the upper back, adjust your foot spacing so that it is approximately shoulder width apart, give or take a little based on your comfort.

3.  In one smooth motion, replicate a “sitting” motion, pushing the hips back as your torso dips down between your legs, knees pointing slightly outward and away from the body.

This is the most natural plane of the movement, and carries the smallest risk of injury.

DO NOT attempt to merely bend at the knee instead of the hip, as doing so cultivates a bad habit and exponentially increases injury risk as your weight increases.

4.  Perform 3 working sets (working set described as one in which you can only perform 6-9 reps before failure) 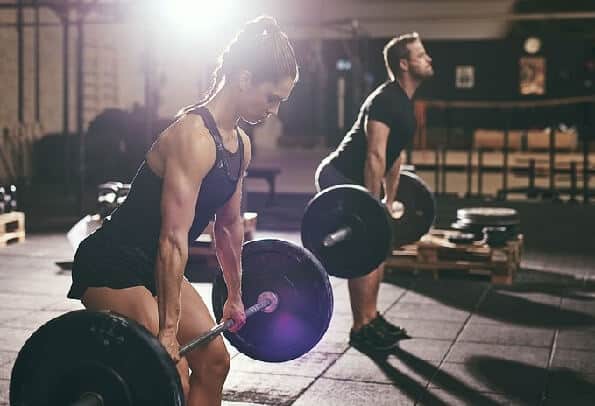 The deadlift is arguably one of the most taxing movements on the body, as it requires significant co-ordination between the lower and upper body parts to accomplish.

The deadlift helps to strengthen the important extensor muscles of the lower back, key to maintaining flexibility.

An Olympic movement, this exercise has been about in existence since fitness became documented, brutally effective in eliciting a massive testosterone surge.

This exercise uses dynamic motion to propel a barbell from a dead stop to an overhead position, all in one fluid movement that co-ordinated the hips, arms, knees , shoulders and abdominals.

Though considered primarily a deltoid (shoulder) exercise, the military press recruits the triceps, abdominals, back and obliques for it to be properly pulled off. Another excellent testosterone boosting exercise. 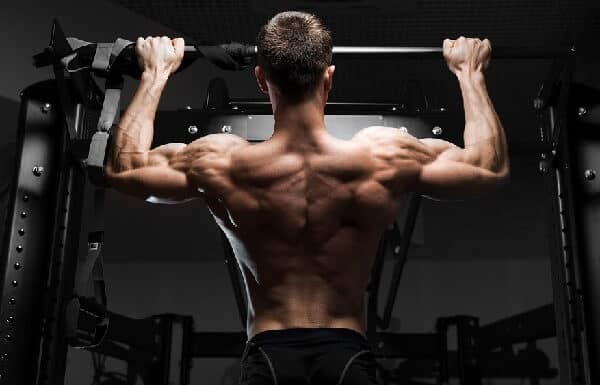 Many people still can’t perform a single pull up, simply because it is that tough. Anyone can squat or deadlift, but not everyone can do a pullup.

This movement is the ideal upper body blaster, as it requires strong back muscles, in co-ordination with the arms and to a lesser extend abdominal to pull off.

If you can’t do proper reps, start with negatives (hanging position and resisting the descent) to build strength and still surge testosterone levels.

Now that you have the 5 best testosterone boosting exercises, does this mean that you should do them everyday?

They are extremely taxing, and will result in CNS fatigue if done too often.

The ideal way to train is to allow your body 48 hours to recover after each training session.

Another word of wisdom; try to not perform deadlifts and squats during the same workout.

These two exercises should form the “base” of your testosterone boosting training regimen, so do them on alternating workouts, in conjunction to 2 other exercises you choose.

Follow this simple, full body routine for 12 weeks and see the dramatic changes to your body that occurs.

Sometimes, the simplest and most primitive movements are what yields the best results, and what can take you from being a boy scout to a hot-blooded man!


Amazon Disclosure: “We are a participant in the Amazon Services LLC Associates Program, an affiliate advertising program designed to provide a means for us to earn fees by linking to Amazon.com and affiliated sites.”